Commissioner Ted Terry: Together, We Can Move DeKalb Forward

“Together, We Can Move DeKalb Forward” was my campaign motto, the reason I believe I was elected and is the mantra I am committed to as your DeKalb County Super District 6 Commissioner. As I approach the conclusion of my first quarter in this position, I have spent the past few months meeting and learning about the DeKalb County departments, service delivery, available resources and the operations as a whole. I am also navigating through zoning applications and their effect on the bigger picture: the impact of development, how it best enhances the community that will house it, the effect to minimize or maximize existing green space and how to merge existing and new opportunities into a beneficial long-term plan.

South DeKalb is a jewel. Its location and proximity to major interstate systems that connect to the greater metro are invaluable. It also has two things that North DeKalb now lacks, land and natural greenspace. One of South DeKalb’s greatest assets is the residents and businesses that make the area home. They are loyal and dedicated to the community. What South DeKalb does not and has not had for decades is the investment and resources needed to maintain, build or improve an economically thriving business community.

As a newly-elected Commissioner, I want to take the time to assess where we are, without interference from what I have heard and read by others looking in from the outside. I have many ideas but I owe South DeKalb the opportunity to hear firsthand what its residents’ priorities are; from neighborhoods, existing businesses and organizations who are experts in the area, like the Metro South CID, the South DeKalb Business Association, and Decide DeKalb, the County’s Development Authority.

Equally important is the input from those in the trenches. Business development is more than incentivizing companies to set up “pop-up shops,” fast food, liquor stores, pawnshops and other businesses that fail the community. It is no secret that crime, low school statistics, infrastructure issues and neglect plague opportunities of interest. I would also like to be involved in a coalition that includes faith-based leaders, education, public safety, local and state officials.

There has already been some movement. Blackhall Studios has made a huge investment by making the area its home. This statement has the potential to populate other businesses that cater to a multitude of opportunities that this type of production capitalizes on, producing cells of future prospects and a foundation for entrepreneurs. The Conley industrial community has limitless potential for expansion and growth.

I am currently collaborating on a proposal with two organizations that have experience in urban micro-farming, along with a contagious passion to introduce and assist with state-of-the-art best practices. This is just one of several initial discussions that I am interested in. My goal is to approach the healing of the South DeKalb community holistically, rebuilding with a long-term objective and vision for a thriving, prosperous and self-sufficient portion of DeKalb County and the State of Georgia. How do we get there? I hope to add more the next time I am invited to share my thoughts, as I work with other stakeholders, both in the business and residential communities.

I will be hosting a series of conversations with Maria Balias, the former executive director of Leadership DeKalb – I am thrilled to have her as part of my team! These quarterly conversations will be called “Talks with Ted.” The community will be invited to participate in these virtual “chats” and I look forward to having this platform to share ideas. My official website will be launched soon and will have dates, times and Zoom information, all of which I will share with the Metro South CID. I also want to make sure that I am available to participate in community events so please make sure your event information is emailed to Ted@DeKalbCountyga.gov so they are added to my calendar. 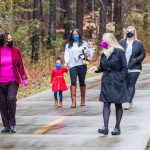