Metro South CID is working to improve traffic and freight congestion in the area. Below are some projects in the works!

The Cedar Grove bridge over the Norfolk Southern railroad has been closed since March 27, 2020, and has created a major disruption for the trucking companies within the MSCID district, resulting in increased costs and commute times. The bridge was built in 1965 and is at the end of its useful life.

In November of 2020, the DeKalb County Board of Commissioners approved $4.1 million for the Cedar Grove Bridge construction and the necessary improvements along the alternate route that will be temporarily used during the bridge closure. The bridge repair will be a design-build project to help construction move as efficiently as possible.

The Metro South CID board of directors, DeKalb County officials, law enforcement and business owners within the district met on Monday, March 22, to determine the next steps to continue the project’s progress. The replacement bridge is currently being designed by AECOM Engineering and DeKalb County public works director Richard Lemke roughly estimated the project will be complete in one and a half to two years, pending any potential weather delays. The County is also working with its SPLOST committee to secure the funding needed to begin repairs to the alternate route used during the bridge closure, pulling from the County’s on-call contractors to expedite the repairs once funding is approved. While these repairs are taking place, the CID has requested detour signage be placed throughout the area to better inform and direct truck drivers, as well as speed detection devices to stop unsafe traffic speeds through residential areas.

The CID has requested detour signage be placed throughout the area to better inform and direct truck drivers not as familiar with this area, and we are working to improve infrastructure and landscaping along the alternate route to better accommodate increased traffic while the bridge is being rebuilt.

Click here to view the list of road network improvements submitted to DeKalb County and a map that details the preferred alternate route for traffic based on the bridge closure. 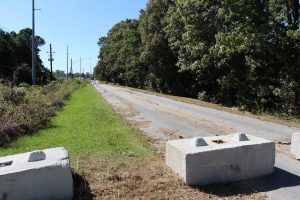 The MSCID Plan will specifically accomplish the following:

With plans to resurface several roads in the district, the CID

In addition, the County is assessing funding options to pave the dirt section of Old McDonough from the XPO entrance to Mason-Dixon Road, including a pothole on Mason-Dixon Road that is the length of a bus and up to two feet deep.

The DeKalb County Board of Commissioners approved $4.1 million for the Cedar Grove bridge construction and the necessary improvements along the alternate route that will be temporarily used during the bridge closure.